Why Focus on Women in the Arts? Why Focus on Women in the Arts?

Do you ever wonder why you remember more male artists when you think of the great artists of the world? Or why when you google the, “best artists in history,” you get a list of mostly male figures? Vincent Van Gogh, Pablo Piccasso, Rembrandt, Leonardo Da Vinci, Jackson Pollock… the list goes on and on with little to no women included. Yes, these men were influential and their work plays an important role in shaping the art world, but where are the women? 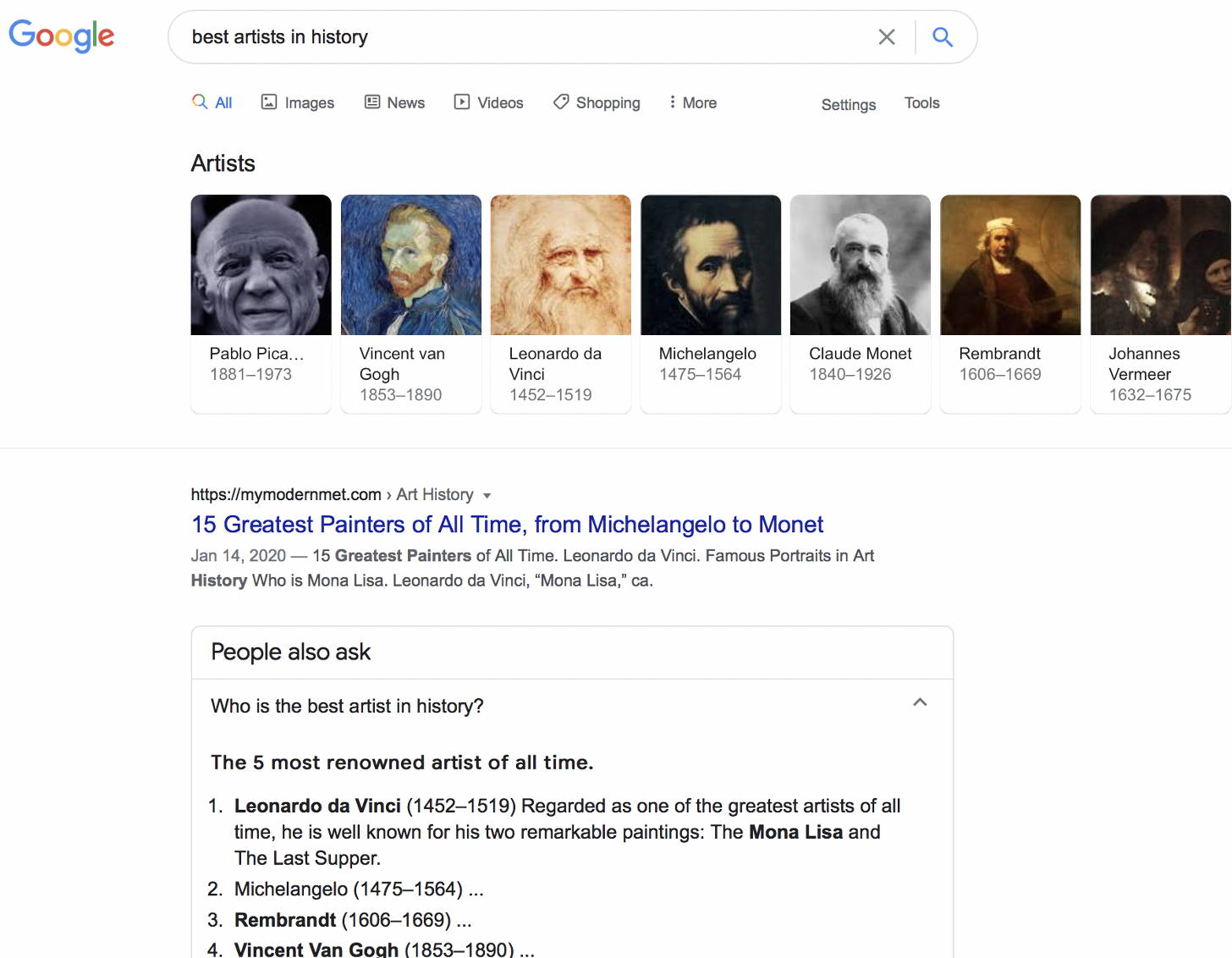 Historically, women have been underrepresented in the art world. Until the 1870s, women were largely barred from professions in the arts, and now if they are represented, they are often underpaid. We are here to be a part of a necessary movement in the art world to focus on women in the arts. If we are successful, one day this platform won’t be needed (here’s hoping).

In all aspects of the art world, there seems to be a lack of women. Spanning auctions, collections, galleries, and even careers as curators or gallery owners, women have less opportunity than men. There is a bias and prejudice that has been built into the system overtime that today largely remains unnoticed. It is called the “superstar effect” - “whereby a small number of elite artists generate a disproportionate amount of the profits,”[1] which limits possibilities and growth. It is an ecosystem that works together, but is not working for females. Let’s break it down:

Auctions continue to be an important method of collecting works of the past and present. Houses like Sotheby’s and Christie’s are globally recognized, and the various sales throughout the year impact the entire art market. From 2008 to 2019, more than $196.6 billion was spent on art at auctions. Of this large number, only $4 billion, or 2%, accounts for works made by women.[2]

According to the UBS and Art Basel Art Market Report from 2019, “only two works by women have ever broken the top 100 auction sales for paintings, despite women being the subject matter of art for approximately half of the top 25.”[1] More recently, according to the 2020 report, works by female artists accounted for 7% of lots sold and 6% of value of sales in the auction market.[2]

Galleries play a vital role in the art market. They decide which artists are worth representing and promoting, and which collectors are worthy of a work. It is the primary market which in turn affects the secondary market. The foundation is set through the galleries as they affect the collectors, museums, fairs, and auctions. There is a ratio of 65%-35% that is repeated over and over again at galleries, which consists of almost twice as many men than women.[3]

According to the Art Market Report 2020, the share of female artists increased at each level, including 5% more for emerging artists, 7% more for mid-career artists, and 2% more for established artists. Representation may have increased slightly, but fewer females become established artists in comparison to males.[4] Progress is being made, but let’s ensure that women represented are not only the top women in the industry (Yayoi Kusama, Joan Mitchell, Louise Bourgeois, Georgia O’Keeffe, Agnes Martin), but that all women creating quality works have a possibility of being recognized. 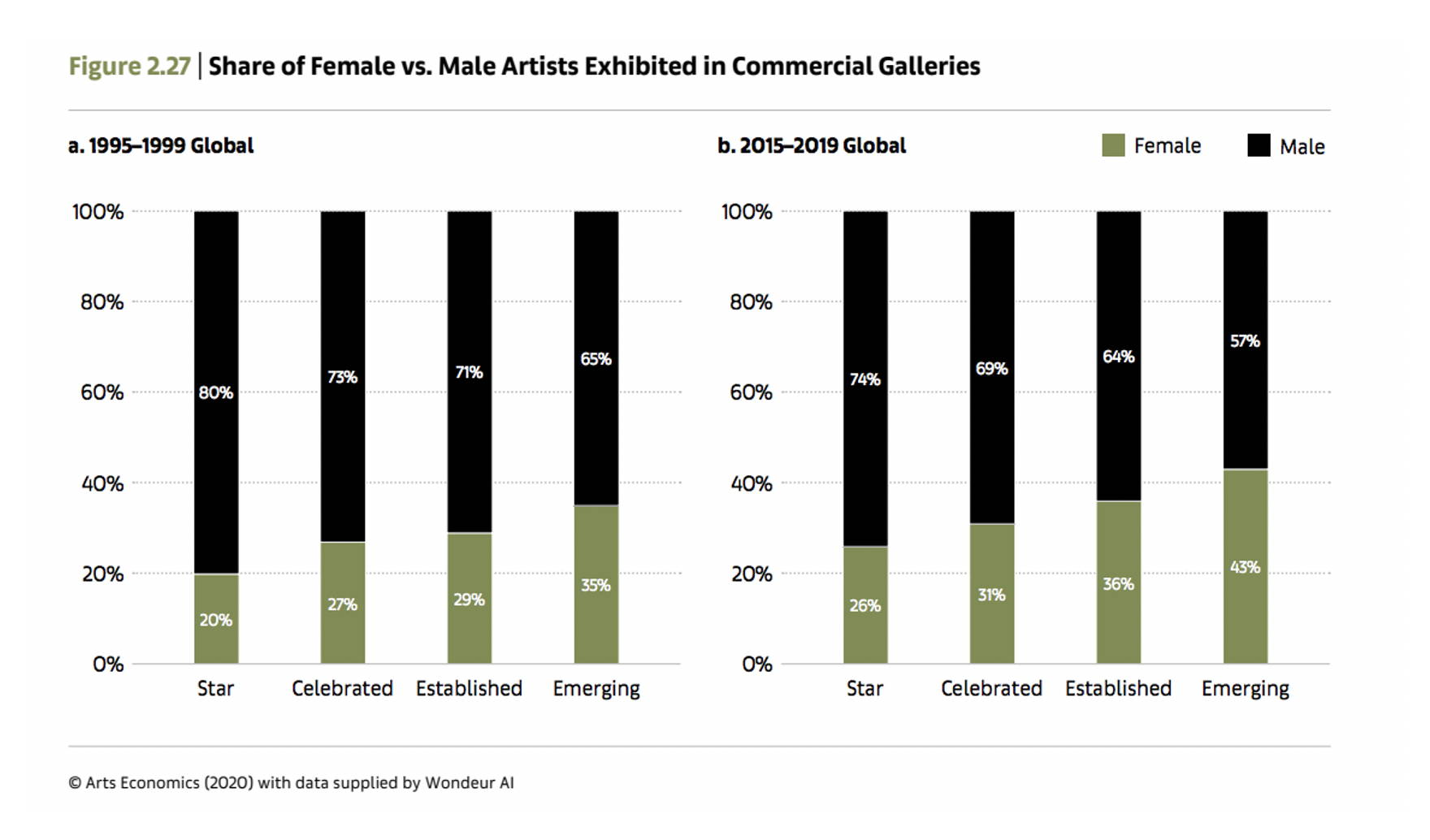 Museums represent the past, present and future of the art world. They are a place of research, inspiration, and their presence has a ripple effect on the future of artists. That is why it is extremely important to see more representation of women in these institutions. Surprisingly, or maybe not, only 11% of all acquisitions and 14% of exhibitions at 26 museums in the United States from 2009 to 2019 were works by female artists.[1]

The good news is that according to the Art Market Report 2020, there has been an increase of female artists in museum exhibitions at a global level.[2] Of course we understand that museums need to look at merit, and that women have not been in the art world as long as men, but let’s acknowledge where we stand and together we can strive for more representation in these institutions. 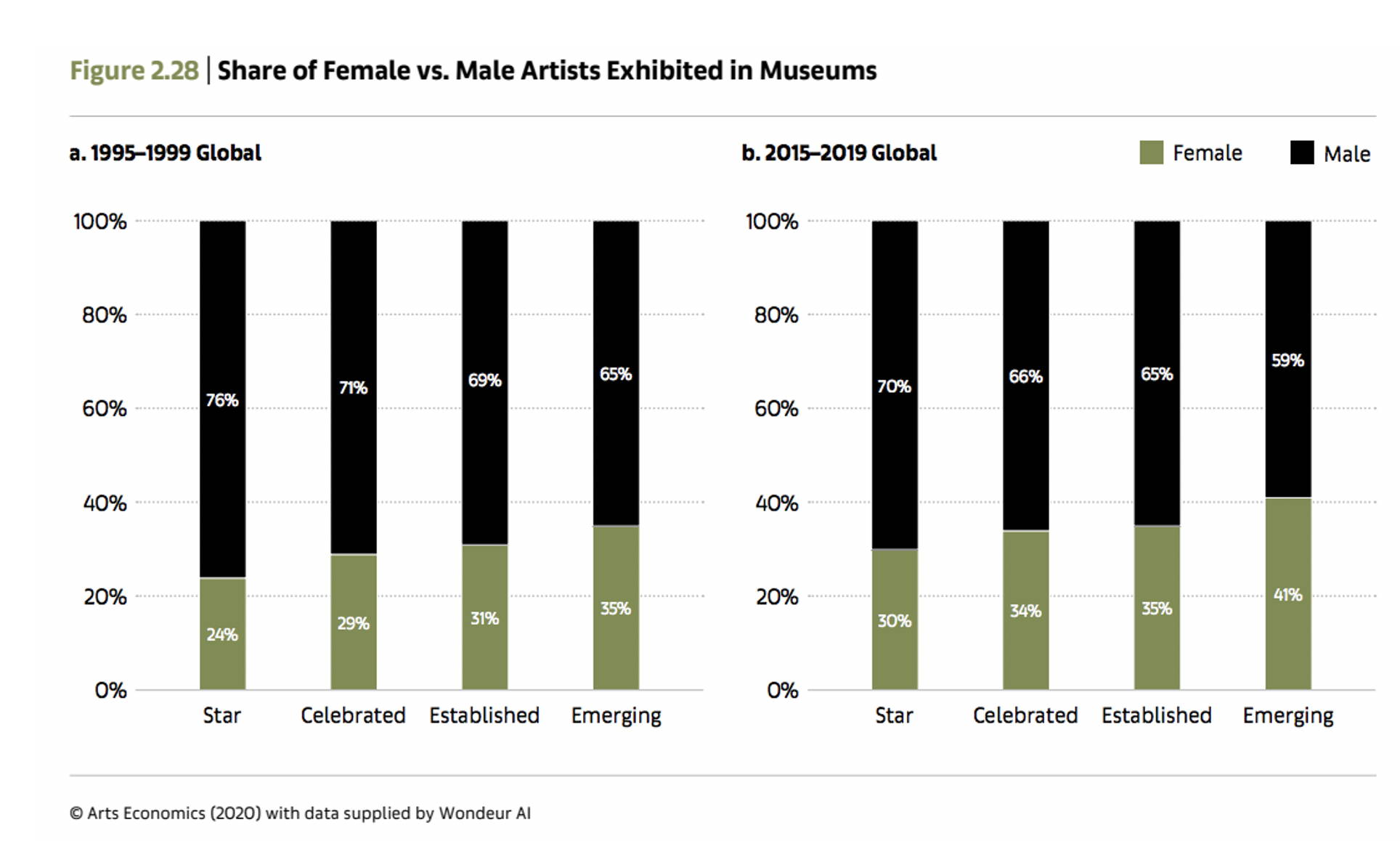 While we believe that there are signs the market value is continuing to grow for women, there remains a lot of work to be done. Only as perceptions change, so will the marketplace and demand for different types of works. Help us be a part of that shift.